Loyalty programs are an important promotional technique in many industries. But the airline industry in particular is renowned for its prestigious, high-reward frequent flyer programs.

All but the very smallest airlines now offer some sort of frequent flyer program that allows customers to earn air miles and other rewards each time they fly.

But there’s one historic airline promotional campaign which serves as a great example of how not to run a frequent flyer program. Or any loyalty program for that matter.

It doesn’t matter what industry you’re in, there's plenty you can learn from this failed initiative.

Back in the early 1980s, what is now the biggest airline in the world was going through a bit of a rough patch.

American Airlines was looking for quick ways to secure capital. Instead of opting for more bank loans, the airline decided to offer a high-value unlimited ticket to its most frequent flyers.

The model they settled on was an unlimited flight pass that they branded as the AAirpass. Nowadays, ‘unlimited’ very rarely means unlimited. Businesses usually place many different restrictions on this kind of offer to protect themselves from exploitation. But the AAirpass was truly unlimited.

That may sound like a lot, but when you consider the fact that the AAirpass was limitless, and membership was life-long, it really was a steal.

Unfortunately for the savvy customers who bought their own AAirpass, American Airlines quickly realized they were losing millions of dollars because of the sheer number of flights that were being taken.

Steven Rothstein and Jacques Vroom, the two customers who used their AAirpasses the most, accumulated almost 50 million miles of flights in total. All this without paying any additional cash for their tickets. 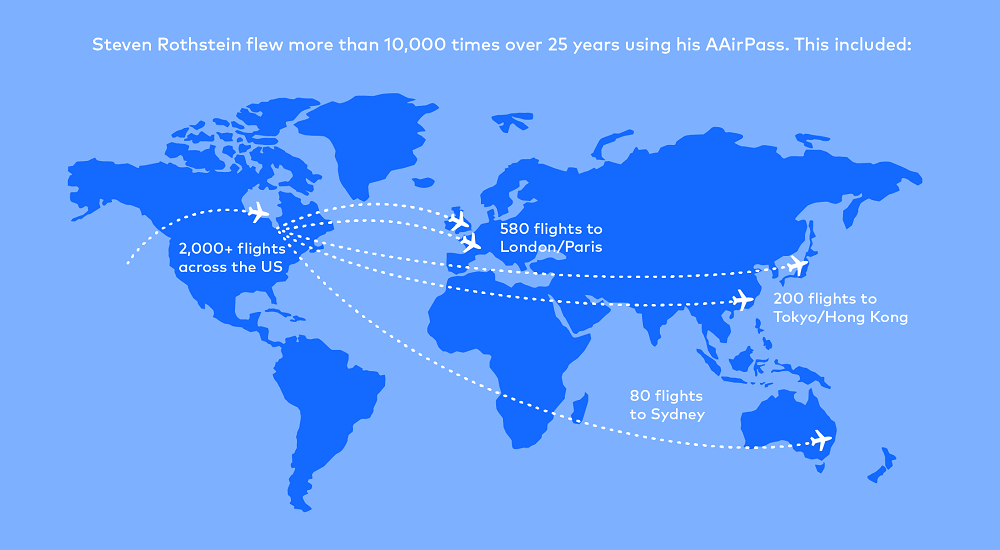 Eventually, American Airlines started an investigation to see if there was any way they could cancel the membership of the most frequent AAirpass holders.

But because the early AAirpass contracts had virtually no restrictions, American Airlines had a hard time proving any wrongdoing.

After lengthy legal disputes, they did manage to successfully revoke the passes of the two most prolific AAirpass users on the grounds of ‘fraudulent’ behavior related to their companion passes.

After a couple of price increases, American Airlines eventually stopped selling the unlimited AAirpass in 1994. New restrictions were added and the program was rebranded as AirPass.

Issues with the AAirpass scheme

While the AAirpass had great potential from a marketing perspective, in the long run it had some negative effects on American Airlines’ brand. In the eyes of many customers, the airline's attempts to restrict how much the most frequent AAirpass users could fly were unfair.

Running a life-long membership program isn’t a bad idea in itself. But the pricing of the AAirpass and the lack of restrictions in the contract meant it was poorly conceived from the start.

For the launch price of $250,000, an AAirpass holder would feasibly only need to take 250 international flights to recoup the money they had spent on the pass.

But, when you take into account the fact that the AAirpass allowed holders to take free flights whenever they wanted, it’s no surprise you had people like Steven Rothstein taking hundreds of flights per year just because they could.

Some promotions intentionally run at a loss because their main purpose is non-monetary - i.e. marketing or brand awareness. But the AAirpass was specifically launched to raise capital at a time when American Airlines was short of cash. As a result, the program backfired massively.

What we can learn from AAirpass

For more information about promotions and how to run effective campaigns, check out our Content Library.