A look at the current state of ecommerce in India

For any ecommerce brand aiming for rapid growth or considering a region for expansion, India is hard to ignore.

India is one of the world’s largest consumer markets, ranking sixth in the World Bank’s survey of global consumer markets. It is also a market with huge future potential.

The country has seen strong economic growth over the past decade and the World Economic Forum predicts it will become the world’s third largest consumer economy by 2030. Between 2014 and 2018, its ecommerce market more than tripled from $14 billion to $50 billion.

It also has a young population and is on track to become the world’s most populous nation by 2026.

In this article, we’ll take a look at:

As one of the world’s most dynamic economies, India’s growing middle class — and their increasing disposable income — has fuelled rapid growth in the Indian ecommerce industry.

This new, upwardly mobile group is choosing to buy goods online, especially consumer electronics and fashion, in greater numbers than ever. But they’re far from the only segment benefiting from the Indian digital revolution.

Internet penetration in India increased significantly over the past five-to-ten years, sitting at 50% in 2020. The majority of these new internet users have come from rural areas — a sea-change in the composition of the Indian consumer base.

India is now home to a number of large ecommerce businesses, both global and Indian-owned, that cater to this swelling cohort of online consumers. These companies are bringing a ‘mobile-first’ perspective to online retail that has been highly disruptive. 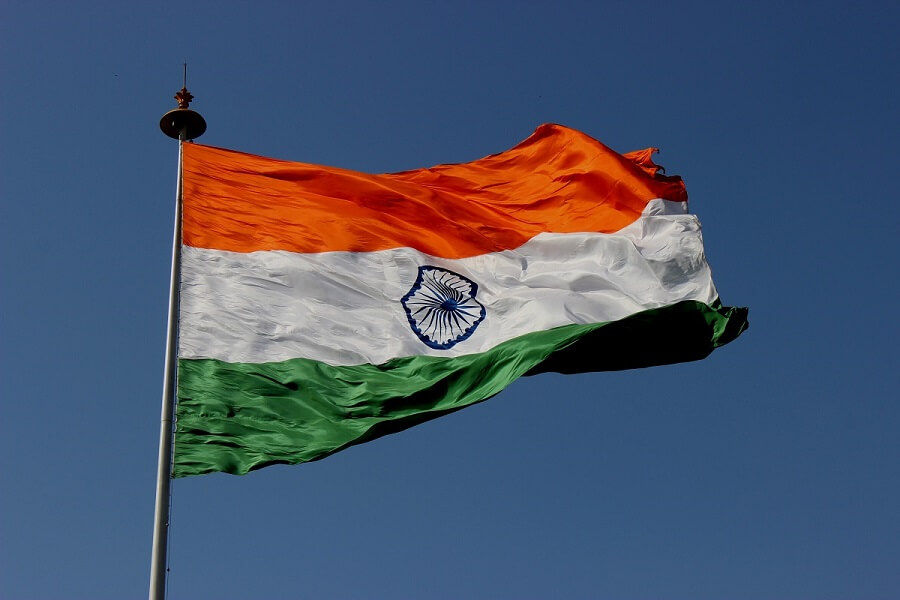 The biggest players in Indian ecommerce landscape are:

Walmart-owned Flipkart is currently the biggest ecommerce site in India by market share. As of October 2020 its market share sat at 31.9%, significantly less than the 39.5% it boasted less than four years earlier.

Just like Amazon, Flipkart started out selling books, after which it switched to the universal online marketplace model.

Flipkart’s main competitor is Amazon India. As of October 2020, Amazon India had a market share of 31.2%, putting it just 0.5% behind Flipkart. Amazon has invested heavily in its Indian arm, which began operations back in 2013.

Amazon India is another universal online marketplace, which sells products from thousands of local vendors and other businesses.

Unlike the rest of the major ecommerce sites in India, Myntra specializes in one vertical - fashion & homewares. The vast majority of Myntra’s sales come via its app.  Myntra is actually majority-owned by Flipkart, which acquired it in 2014 for $280 million.

Snapdeal is another general marketplace ecommerce site that sells products from a variety of different categories. Snapdeal is the third largest ecommerce site in India in terms of monthly visitors. Its popularity is partly due to its focus on value products, as opposed to branded products.

With major ecommerce brands vying for their share of the Indian consumer market, many of them have turned to customer loyalty initiatives.

Amazon is a market leader in ecommerce customer loyalty thanks to Amazon Prime. It’s offered in India for ₹329 per month, or ₹999 for the entire year. In return, customers get priority shipping, plus access to Amazon Prime Music and Amazon Prime Video. In 2020, Amazon Prime had 10 million subscribers in India.

Flipkart’s competitor service, Flipkart Plus, approaches customer loyalty in a different way. It’s based around Flipkart’s coin system, which rewards customers with ‘supercoins’ for every item they buy.

There’s no fee to take advantage of Flipkart Plus membership, customers just have to earn 200 supercoins within the space of 12 months. They then get double the standard 2 supercoin reward for every ₹100 they spend. Flipkart Plus offers free, fast delivery.

Snapdeal did have a subscription service, Snapdeal Gold, which offered free delivery on items. But it has been discontinued.

Under Indian law, foreign ecommerce businesses are only allowed to operate as third-party marketplaces. This means they can only connect buyers and sellers, and can’t hold or sell their own inventory. This regulation was enacted to protect India’s local businesses from large foreign competitors. As a result, foreign ecommerce brands primarily list products from Indian sellers.

This has been a bit of a headache for the big ecommerce sites, as many smaller, traditional Indian businesses are still wary of ecommerce and online sales. As a result, the major ecommerce brands have invested heavily in initiatives to encourage local vendors to sell online.

Amazon launched its Chai Cart initiative in 2015 to help spread word about the benefits of ecommerce for small businesses and goods producers. Amazon representatives traveled around 31 Indian cities, handing out tea and other drinks, while talking to local businesses.

After this, Amazon launched its Amazon Tatkal service, which provided mobile photography, cataloguing and listing services to help vendors set up their online stores.

Indian ecommerce during the pandemic

Out of the top nine largest economies, India suffered the biggest year-over-year GDP drop between April and June 2020, as its economy was buffeted by COVID-19. 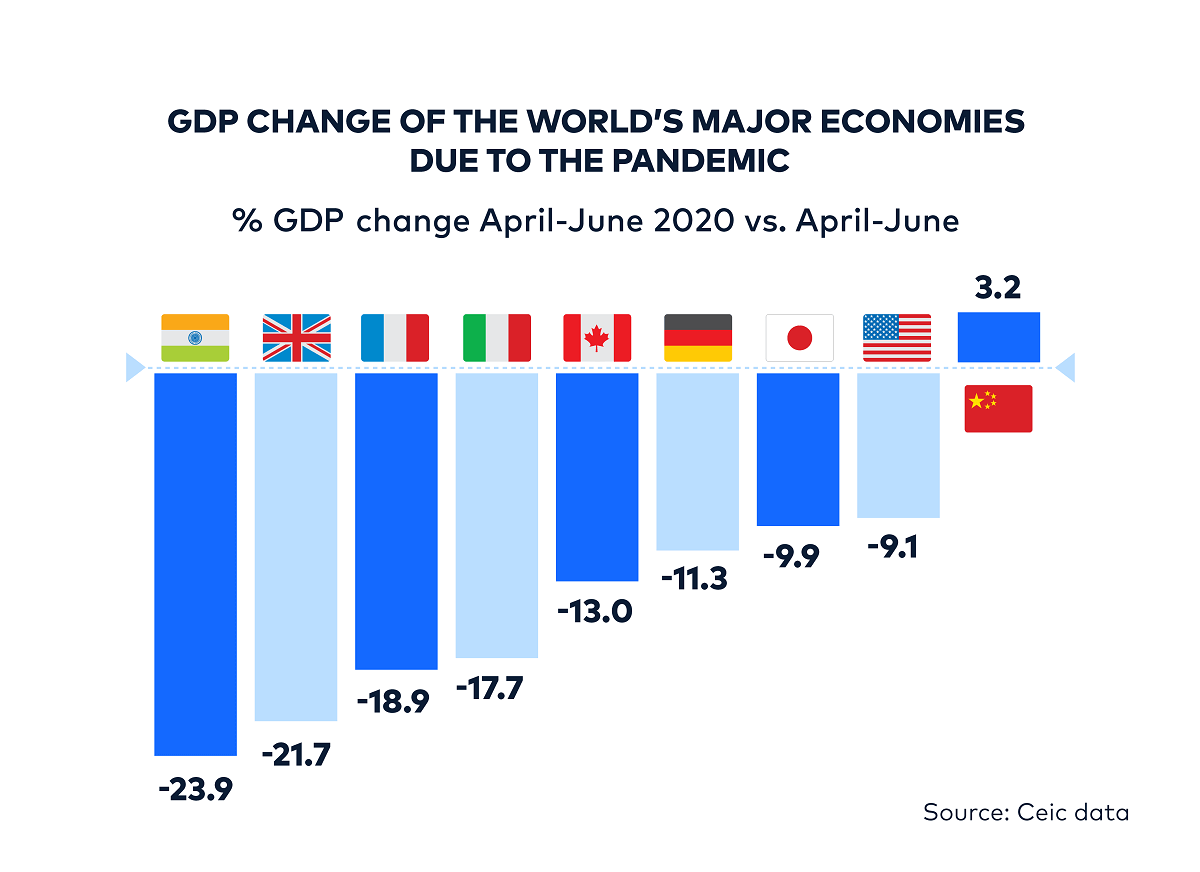 Despite this significant decline in economic growth, ecommerce maintained its growth trajectory —  millions of people needed products delivered straight to their homes during lockdown.

According to Unicommerce, ecommerce consumer demand across all major product categories rose between February and June 2020. 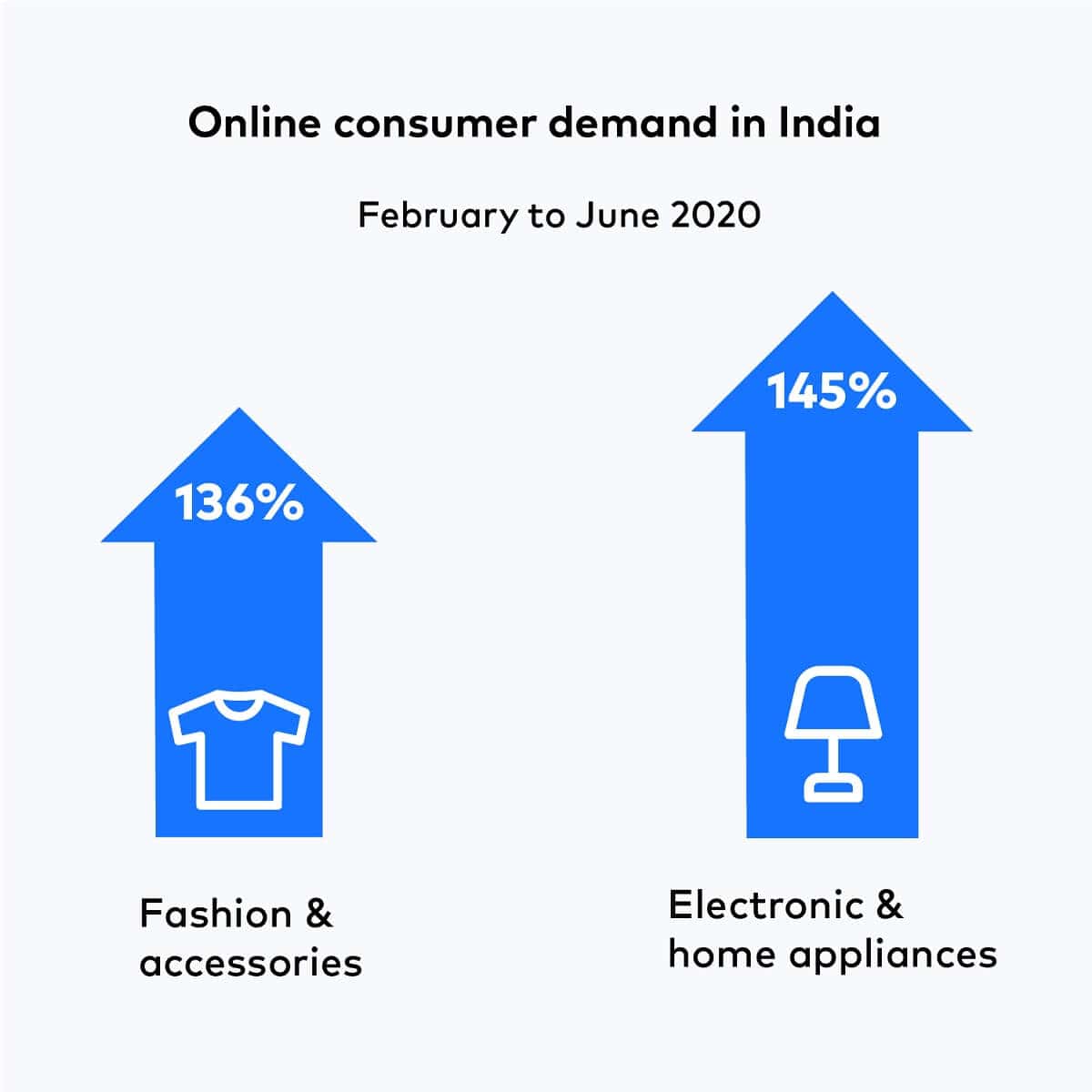 Interestingly, the demand for online goods remained after the first wave of lockdowns ended. India’s ecommerce order volume increased 36% in the final quarter of 2020. Of all ecommerce sectors; health, wellness and beauty saw the biggest increase during that time period.

Post-pandemic, Bank of America predicts that the total size of the Indian commerce market will be near $200 billion by 2025.

Much of this inward funding has come from big multinationals like Amazon and Walmart. Between them they have invested well over $20 billion in the sector over the past couple of years.

Facebook has also invested a significant amount of money as it tries to gain a foothold in Indian ecommerce. In June 2020, Facebook’s $5.7 billion investment in Jio Platforms was approved. Jio Platforms is an arm of Reliance Industries, involved in a number of ecommerce-related operations.

In January 2021, B2B ecommerce site Udaan raised $280 million in funding from investors including Tencent and DST Global. It competes in the B2B ecommerce sector with Flipkart Wholesale, which recently added grocery delivery to its repertoire.

Indian ecommerce looks set to attract big sums of foreign investment as its growth continues. But additional changes to India’s foreign investment rules are being planned. These could affect some of Amazon and Walmart’s operations, as they may no longer be allowed to list any sellers in which they have even an indirect stake in.

Keeping up with the competition using promotions

With such big players dominating the Indian ecommerce market, smaller businesses will need to stay competitive. The major ecommerce brands already have complex promotional campaigns on the go.

But there are plenty of opportunities for smaller businesses too, especially as the Indian government continues to try to level the playing field for domestic businesses.

Making headway against large, multinational competitors is hard in any industry. Luckily, ecommerce and online sales is the perfect sector for creative, engaging promotions.

Customers increasingly want personalized experiences and rewards, which programs like Flipkart Plus already offer. Smaller businesses can now also set up their own loyalty programs, referral programs, and other digital promotions with minimal investment.

Our Promotion Engine allows businesses to create practically any promotion they like. Using conditions and effects, you can customize your promotional campaigns in an unlimited number of ways.

Household name businesses in all sorts of industries use our Promotion Engine to run their promotions. We power market-leading loyalty programs, acquisition driving referral programs and all sorts of gamified promotions that allow our customers to add value to their business.

For more information about the many ways we can help you business, check out our Content Library. It contains resources to help you understand promotional theory, discover how we’ve helped our customers achieve their business goals, and guides to help you build all sorts of campaigns in our Promotion Engine.