Get some inspiration from these unique Christmas promotions

There’s no better time of year to run promotions than the festive season. Holiday promotional campaigns are a great way to spread the Christmas spirit among your customers, and even your workmates.

Read on to see four of our favourite Christmas promotions this year. Hopefully they’ll give you some Christmas ideas of your own.

For the past few years, LEGO has released special Christmas-themed promotional sets for the holiday season. Last year it was a 392-piece LEGO Christmas tree set which came free with every purchase over $120.

But this year they’ve stepped their Christmas promotion up a notch with a special Charles Dickens tribute set.

The set features a small scene from ‘A Christmas Carol’, complete with a tiny LEGO version of Christmas antihero Ebenezer Scrooge.

Customers will get their own free copy of the promotional set when they spend $150 or more in the LEGO store. With a retail value of $22.99 it makes a nice addition to any kid's Christmas present pile.

For the past few years, cosmetics brand Avon has run its ‘12 Days of Deals’ promotional campaign in the lead up to Christmas.

While the campaign is an obvious reference to the ‘12 Days of Christmas’, Avon tends to run its ‘12 Days of Deals’ in late November. In fact, this year it ran from November 9 until November 20, so it’s actually more of a Black Friday promotion with a Christmas theme.

Regardless, it’s a good attention grabber. On each of the 12 days, customers are sent a discount code for a specific promotion. The deals are usually formatted to give ‘X product free with every spend over X amount’, making them a good option for small Christmas gifts.

Avon also sells its products through its representatives, 6.4 million of them to be precise. Simple, shareable, eye-catching deals like these are useful for the representatives who actually have to go out and make sales.

IKEA is well known for its interesting, creative marketing campaigns. And this year’s holiday promotion is no exception.

IKEA opted for a media-driven campaign for the 2020 holiday season. Four popular influencers will take turns sharing tips and ideas around the themes of decorating, cooking, celebrating and gift-giving. The content will be published on Instagram and YouTube.

Each influencer will pick their own curated product bundle that customers can then buy from IKEA. There will also be free prize giveaways across the four-week promotion period.

In comparison to the Avon campaign, IKEA’s ‘Four Weeks of Wonder’ is aimed towards longer-term objectives, i.e. brand recognition and reputability.

The final promotion on our list is Starbucks' reusable Christmas coffee cups which are released every year in the US market.

The reusable cups were given away free to customers who bought one of Starbucks’ handcrafted holiday or fall beverages.

Customers didn’t even have to go in-store to collect a free cup. They were also available for drive-thru and curbside pickup, as well as delivery via Uber Eats.

This promotion is a classic example of a free giveaway used to attract customers and increase sales. The cups were only available with the Starbucks handcrafted holiday/fall drinks selection, which includes flavours like Chestnut Praline Latte, Salted Caramel Cream Cold Brew and Toasted White Chocolate Mocha.

The promise of a free cup, plus the selection of unusual drinks, is a great combo to help secure new customers. The brand may also score some environmental points with the cups’ reusability.

Campaigns like these can help brands build a rapport with their customers at this special time of the year. But they can be effective at any time of year. They key is to think outside the box a little when planning campaigns. It takes a bit more effort, but you'll be rewarded for trying something different, rather than simply setting up a standard Christmas sale.

All the promotions shown above can be built using our Promotion Engine. If you'd like to find out more about Talon.One, or promotions in general, check out our Content Library. 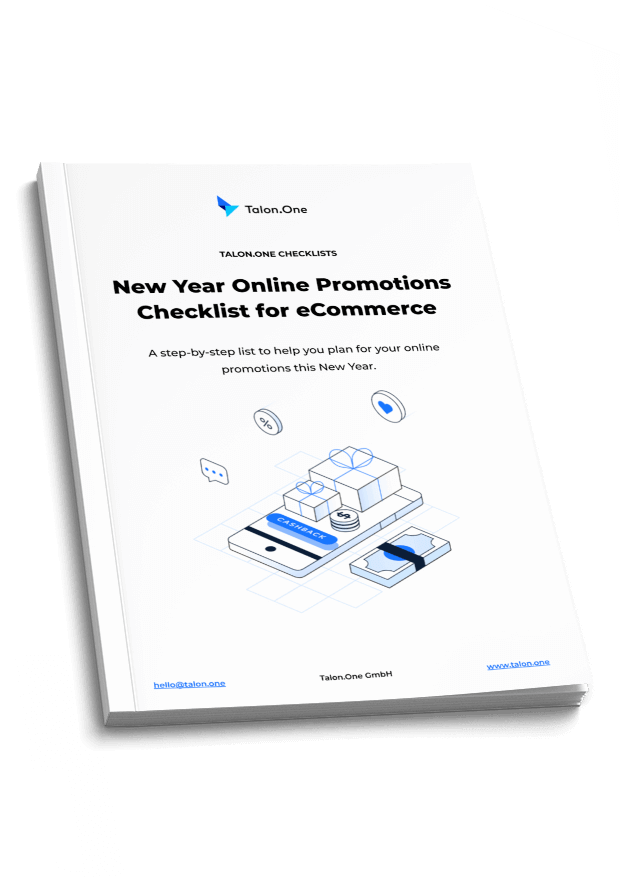 Hands-on framework for your end-of-year sales
Get Your Free Checklist
Download Your Talon.One Loyalty Playbook