Influencing consumer habits with the help of promotions

Many of the world’s most successful businesses have risen to the top because they understand the importance of consumer habits and consumer behavior.

Perhaps the most well-known example is Facebook, with its revolutionary algorithms and numerous habit-building features.

Then you have businesses in other fields that foster particular consumer habits to their advantage. Take the wave of ‘free-to-play’ mobile games that make enormous sums of money from in-game purchases, for example.

Cases like these have given the topic of ‘consumer habit building’ somewhat negative connotations. After all, creating negative buying habits among your customers will severely harm your brand image and customer loyalty in the long run.

But ultimately, if implemented ethically and responsibly, consumer habit building can help consumers and businesses alike.

A habit is defined as a behavior or routine that is repeated regularly. The reason habits can be hard to break is because they're carried out subconsciously and reflexively.

Habits can range from the healthy, to the mundane, and even the downright detrimental - but everyone has them. All habits are formed and perpetuated by the same simple feedback mechanism in our brains. This is referred to as the habit loop: 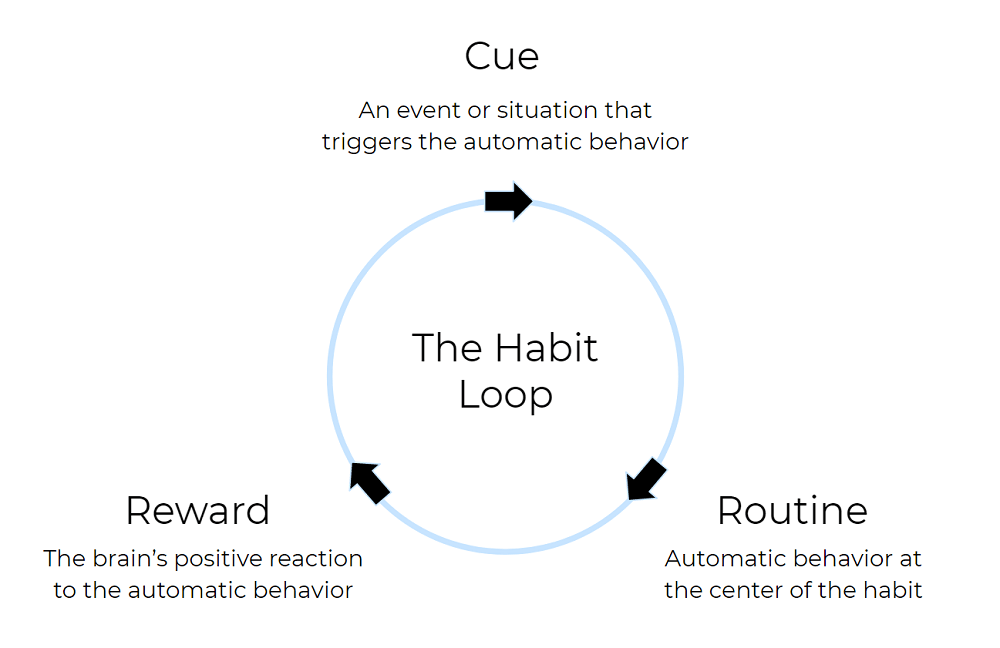 One of the key characteristics of a habit is the fact that it is learned. This is what the concept of ‘habit building’ latches on to. It creates the necessary environment for a habit loop to develop.

How to develop consumer habits

Some people develop habits more easily than others. But, on average, it takes about 2 months.

A study by University College London revealed that it takes, on average, 66 days to form a habit.

With regards to the habit loop, the routine comes into play once the habit has fully settled in.

Certain product categories are much more suitable for rewards and consumer-behavior-targeting promotions. It would be unethical to foster a consumer habit around excessive alcohol consumption, for example.

But there are plenty of product groups, like organic food, health and fitness supplies, books, etc., that would be perfect for consumer habit-building promotions.

The primary motivator for the customer is the reward. Luckily, that’s the easiest part of the loop for businesses to drive.

One of the most common reward mechanisms businesses use is loyalty points. Loyalty points are usually given to loyalty program members when they buy products. But, theoretically, they can be given for any customer action.

There are many different ways to reward customers with loyalty points, and picking the right one does require some consideration. Let’s take a look at two examples:

The first example is simple. It offers a set number of loyalty points when customers spend over a certain amount. In comparison, the second example is more complex:

These may seem like irrelevant details, but they can make a big difference. The second example is much more specific, and has a better chance of appealing to customers who regularly buy homeware items.

Research suggests that random rewards are actually the most effective at getting customers to spend.

An experiment conducted at the Chinese University of Hong Kong found that runners will complete, on average, twice as many laps when given random rewards instead of set rewards after each lap.

Random rewards aren’t applicable to all businesses or promotions. But the elements of surprise and gamification can still be replicated using more complex loyalty reward mechanisms, as seen in example 2 above.

Once you’ve decided how you want to reward your customers, it’s time to start thinking about cues. Cues are the third element of the habit loop, alongside rewards and routine.

Rewards can work well as a motivator on their own. But if you want to promote consumer habit formation, you’ll need to try to establish some form of cue to keep the habit loop in motion.

A cue is an event, situation, emotion, etc. that triggers the automatic routine in the customer.

A good example given by McKinsey is the anticipation of social interaction. This is a key contextual cue that is known to drive sales of chewing gum.

Other brands make use of notifications and other time-based cues to help establish consumer habits. In the UK, Dominos has a long-running promotional campaign called ‘Two for Tuesday’ where customers can get buy one, get one free deals on all pizzas.

This simple promotion has been highly effective at creating an association between Tuesdays and Dominos in the UK.

Behind Sundays, Tuesdays see the highest number of ‘I want pizza’ tweets, with a spike around 1-2pm US Eastern Time (dinner time in the UK) - Brandwatch data

Here you can see the cue (Tuesdays) and the reward (buy one, get one free) working in tandem. Once you have a reward and a cue in place, all that’s left to do is wait for the routine to settle in. When it has, you’ve created a habit that will drive regular sales.